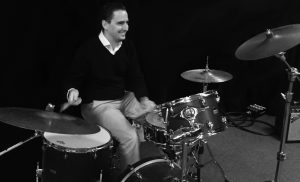 Andy graduated from the London College of Music in 2000, winning the British Reserve Percussionist prize and became a successful session musician in London. During this time he had the privilege of playing for a number of ensembles and orchestras, including Black Dyke Brass Band, The Ernest Reed Orchestra, Warwick University Symphony Orchestra, and Royal Airforce Central Band.

Andy has also played in many other rock jazz bands and function bands, both recording and playing live. He has played gigs in London venues such Dublin Castle in Camden, Rock Garden in Covent Gardens and Camden Palais as well as venues abroad in America, France and Brussels. Andy has composed many percussion pieces that have been performed across Europe and has successfully directed different percussion ensembles throughout the last 15 years.

In 2002, Andy graduated from Oxford Brookes University with his PGCE and began teaching in schools around Berkshire. In 2006 Andy become Head of Music in a school in Wokingham and has since worked in various other schools and FE Colleges as a Middle Leader.

Through Andy's unique tuition and guidance, many of his students have gained admission to Music Conservatoires including Royal Academy of Music, Trinity Laban, The Guildhall and Royal Northern.

Andy continues to perform across the country in theatres, clubs and music venues playing drums and orchestral percussion.